You are probably underestimating your muscles. In fact, almost everyone does. While everyone knows, for example, that muscles are important for function-activities such as walking, climbing and lifting – few appreciate how important muscles are for a feeling.

If you haven’t noticed this connection between mood and muscles yourself, take heart; this is only a recent discovery. Surprisingly, the entire scientific community remained in the dark until approximately 2003 (1), when a team of researchers from Copenhagen reported a remarkable discovery: Muscles during exercise release small chemical messengers called myokines, which have a powerful effect on organ function. including brain function (2).

Through the actions of myokines, muscle tissue communicates directly with the brain about its activity, triggering a cascade of biological responses that improve memory, learning and mood (see Figure 1 below). This newly discovered mechanism suggests that a person engaging in physical activities that build and maintain healthy muscle tissue can expect to enjoy a range of cognitive and mental health benefits. Recent clinical studies have shown exactly this effect (3).

If anyone has ever accused you of being complicated, they really didn’t have a clue. Although you can’t tell by looking in the mirror, the body you see reflected is made up of more than 100 trillion cells. The cells are small; if you put cells side by side in a police line, for example, about 200 of them will fit into one millimeter.

But this is only the beginning of the miracle we call you. Every cell in your body is itself a thriving civilization, populated by hundreds of millions of proteins and other molecules, each with a work ethic that would put John Henry to shame. Scaled to our size, your cellular citizens fly around at the speed of fighter jets, each busy performing hundreds or even thousands of life-saving functions per second. They must maintain this frenzied pace without interruption in order to survive, a total of billions trillions of precisely performed chemical activities every day.

If you somehow possess a superhuman imagination capable of imagining this cellular cacophony, you might ask yourself: what is the power of it all? Remarkably, the vast amount of energy required for your cells to function ultimately comes from the oxygen you breathe and the food you eat.

That last one seems important to remember the next time you don’t feel like eating your vegetables. Digested to the lowest denominator, nutrients are converted by the mitochondria—perhaps the VIP citizens of your cells—into billions of molecules of adenosine triphosphate (ATP) per minute. Although even a single cell can contain thousands of these energy-producing mitochondria, muscle cells are mitochondrial beehives, possessing tens or even hundreds of thousands to power their operations. Once made, ATP is feasted on by your cells like exhausted runners gobbling PowerBars at the finish line of the Boston Marathon.

You are almost impossible to get out of this molecular chaos. Every thought, feeling and action arises from and depends on this continuous cycle of seeking and producing energy. And if it’s not obvious from this description, the better your cells function on a small level, the better you feel and function on a large level.

This brings us back to resistance training. Given the vital role your muscles play in energy production and brain function, it may be time to start appreciating strength training and muscle building as beneficial to more than athletes and magazine models.

Using your muscles against resistance, for example, is much more effective at strengthening your bones than any calcium supplement (4). Regular muscle activity also improves insulin resistance (the cause of diabetes and many other metabolic conditions) better than any prescription drug.

And we now know that stimulating muscle tissue with resistance training has emotional effects comparable to those of conventional antidepressants and psychotherapies (3). Recent neuroscience suggests that we evolved brains for one primary reason: to move (5). Contrary to our traditional preoccupation with thinking, the primary function of the human brain is to coordinate complex movements (which is probably why we have brains, while giant but motionless sequoias do not).

By recognizing this close connection between the brain and movement, the biological basis of the mind-muscle connection becomes clear and the importance of resistance training for optimal physical and emotional health becomes undeniable. 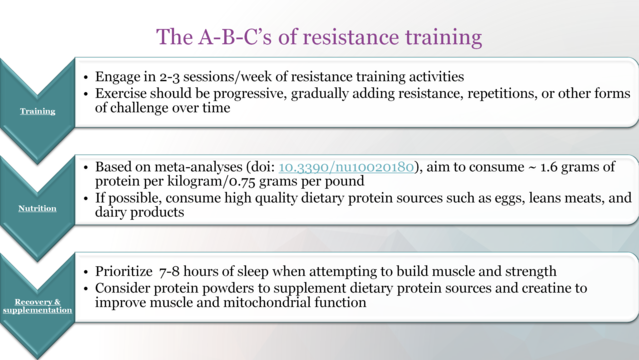