Planners are working to update the traffic congestion management plan in the area. The draft Congestion Management Process for 2022 is open for public comment through Friday. Here is the draft link: https://www.nwarpc.org/transportation/congestion-management-process/.

Written comments can be sent to [email protected]

• The draft will be considered by the Technical Advisory Committee of the Northwest Arkansas Regional Planning Commission on Thursday.

• The group’s policy committee will consider approval of the draft on May 25.

Nobody likes sitting in traffic and wasting time and money, including regional planners studying ways to ease congestion on major roads in the area.

“The study basically analyzes where in the area this congestion is occurring,” said Tim Conklin, assistant director of the Regional Planning Commission for Northwest Arkansas. “Overall, we still have a lot of work to do in Northwest Arkansas as we continue to expect significant population growth over the next 25 years.”

Population projections for the region predict that about 1 million people will live here by 2045.

“We’re really fortunate with our population growing in excess of 100,000 people per decade over the past 30 years, but with that comes the increased demand for travel on our roads and highways,” he said. “If we weren’t increasing, and the population was decreasing, and there were fewer people and fewer cars here, the situation would have been better.”

Traffic congestion or gridlock can cause more than just travel delays, causing a person to miss work or school in the morning and come home late in the evening. Other problems range from economic losses such as lost time and delays in the delivery of goods to quality of life and even safety concerns.

Gridlock makes it difficult to estimate how long it will take to reach a destination, burns more fuel, contributes to road rage and slows emergency response times. Sitting in traffic also eats up free time and time to do other tasks.

“When you treat an area of ​​congestion well, it reduces commute times and lowers the cost of moving freight. It enhances the business environment in the area,” said Nelson Peacock, president and CEO of Northwest Arkansas Council. “Northwest Arkansas must add highways, expand public transit and build transportation technology to effectively manage traffic congestion and remain one of the best places in the country.”

Congestion management plans are required for areas with populations greater than 200,000, according to the Federal Highway Administration. The Northwest Arkansas Plan was last updated in 2015. The department defines congestion as an excess of vehicles on a road at a given time resulting in speeds slower—and sometimes significantly slower—than normal or free-flowing speeds.

Of the 826 miles of road network in the area analyzed in 2019, about 71 were identified as congested.

“We’re updating it this year, but the year of analysis is 2019, because of the pandemic and its impact on people moving within our region,” Conklin said. “So we have a snapshot at the time of 2015 and 2019, and it helps us identify the lanes in the most crowded area that the area should really focus on.”

The 2015 District Congestion Management Plan identified approximately 228 miles of congested lanes in the area. A driveway is generally a linear area that contains one or more modes of transportation. Many of these have since been addressed through transportation improvement projects, many in collaboration with the Arkansas Department of Transportation.

Examples include improvements to the Arkansas lane 265 and the expansion of Interstate 49 and improvements to its intersections. These roads are no longer identified as crowded lanes in the new study, Conklin said.

Conklin said there are plans for more than $1.5 billion in regional transportation projects over the next 20 years to address growth, and that the four cities with voter-approved bond projects have more than $500 million in business of their own.

“We have studies of the major corridors that have identified the projects,” Conklin said. “It will take additional resources and planning to meet our needs in Northwest Arkansas.”

Conklin said the proposed Arkansas 1112 expansion and improvement and the 612 Bypass project that is currently being planned and will be built over the next five or 10 years are two examples. Another example is Arkansas 265, where the final construction of a four-lane facility is through Rogers.

“We’ll update it again in a few years,” Conklin said. “There’s a lot of discussion about whether people are going back to the workplace and what’s the new normal.” “I think after Covid, we’ll see how all of this stabilizes and see how that affects the transportation system. It’s been interesting to see this impact on the transportation system in the last couple of years.”

Growth in Benton County greatly affects the transportation system around Bentonville and Rogers, particularly US 62 and Arkansas 102, and Walton Boulevard, in the north and south.

In Washington County, a major congestion occurs at US 412 in Springdale and on Martin Luther King Jr. Street and the Waddington Drive/I-49 interchange in Fayetteville.

Congestion management identifies congested areas, along with the causes, then develops and implements solutions. The process includes measuring the performance and reliability of the transmission system and evaluating the effectiveness of the solutions.

An example is the synchronization of traffic lights across a region. Other strategies could include managing highway access, adding traffic lights and adding capacity by widening roads or building roads.

Busy lanes are defined by the Federal Highway Administration as those roads with the worst congestion (top 15%) during any of the four peak periods, including morning and evening rush hours, afternoons and weekends.

“For this study, we used a window of two hours in the morning and evening versus four hours, and the reason for that is that in some of the larger metro areas you have a longer duration for crowded conditions,” Conklin said. “In northwest Arkansas, four hours of congestion usually don’t pass.”

Several road projects that could address congested lanes were identified in the study.

The congestion management process will also build on a number of existing plans and studies, including the Regional Transportation Plan, Transit Development Plan, and Northwest Arkansas Bike-Ped Plan.

“As we continue to grow, we will improve our two-lane roads that have no sidewalks, open ditches, narrow lanes and curves with more full street cross-section to accommodate all users and modes of transportation,” Conklin said.

In addition to streets and highways, planners will consider land use planning, such as more mixed-use development, padding, greater density, and sprawl reduction plans. They will also consider adding safety measures including facilities such as bike lanes and designated paths to get people moving around on bikes and walking more. Expanded public transportation across the region will also feature heavily in the plan, such as bus rapid transit systems and roads connecting various cities.

Advanced Passenger Information Systems can also be used to provide a large amount of data to travelers, such as real-time speed estimates on the web or via wireless devices, and scheduling advances for transportation vehicles.

Traffic control systems, often located within a traffic management center, can monitor the volume and flow of traffic using a system of sensors and cameras and analyze traffic conditions to detect emerging problems. The system then makes adjustments to the timing of the traffic light in order to improve the flow of traffic.

The equipment can also change the posted traffic speed limits approaching areas of congestion, congestion, traffic accidents and other conditions that affect the flow of traffic.

The cost of sitting in traffic

Nationally, US traffic congestion cost drivers more than $53 billion in 2021, a 41% increase from 2020, according to the Inrix 2021 Global Traffic Scorecard, released in December. Enrix specializes in global transportation analytics.

The average American driver lost 36 hours due to delays associated with congestion, at a cost of $564 in lost time. That was a 10-hour increase from 2020, but 63 hours lower than pre-pandemic levels.

With so many people stuck at home, driving has dropped dramatically, dropping by 40% in April 2020, according to Inrix.

The economic costs were calculated based on a report from the Federal Highway Administration that calculates driver time to be equal to $15.60 per hour, according to a press release from Inrix. Inrix calculates lost time as the difference between driving during commuting hours versus driving at night with little traffic.

“Covid-19’s impact on transportation lasted well into 2021, changing when, where and how people move,” said Bob Peshaw, transportation analyst at Inrix. “Despite a 28% increase in congestion this year, Americans still save 63 hours compared to normal. “. “The most notable change in commuting during the pandemic – other than reduced travel times and volumes – has been the lack of travel to the city centre.”

A 2012 study commissioned by the Northwest Arkansas Council found that sitting in traffic costs Northwest Arkansas residents more than $103 million annually in downtime and gas. Since that study was conducted, some improvements have been made to address congestion, but more cars have also been added to the mix due to population growth in the area. The study has not been updated.

The Congestion Management Study concluded that eliminating traffic congestion may not be feasible, especially in fast-growing areas. Moreover, eliminating congestion may not actually be desirable if it comes at the expense of economic vitality, livability, or bicycle/pedestrian access. Therefore, it is important to identify what is considered “unacceptable crowding” and to establish appropriate crowding management goals that support regional goals.

Traffic moves south Thursday, May 12, 2022, on College Street in Fayetteville. Regional planners got their first look last week in a draft of a new traffic congestion management process for the Northwest Arkansas metro area. The study provides a baseline assessment of traffic conditions and lays the foundation for developing strategies to reduce congestion on major roads in the area. Visit nwaonline.com/220515Daily/ for today’s photo gallery. (NWA Democrat-Gazette/Andy Shupe) 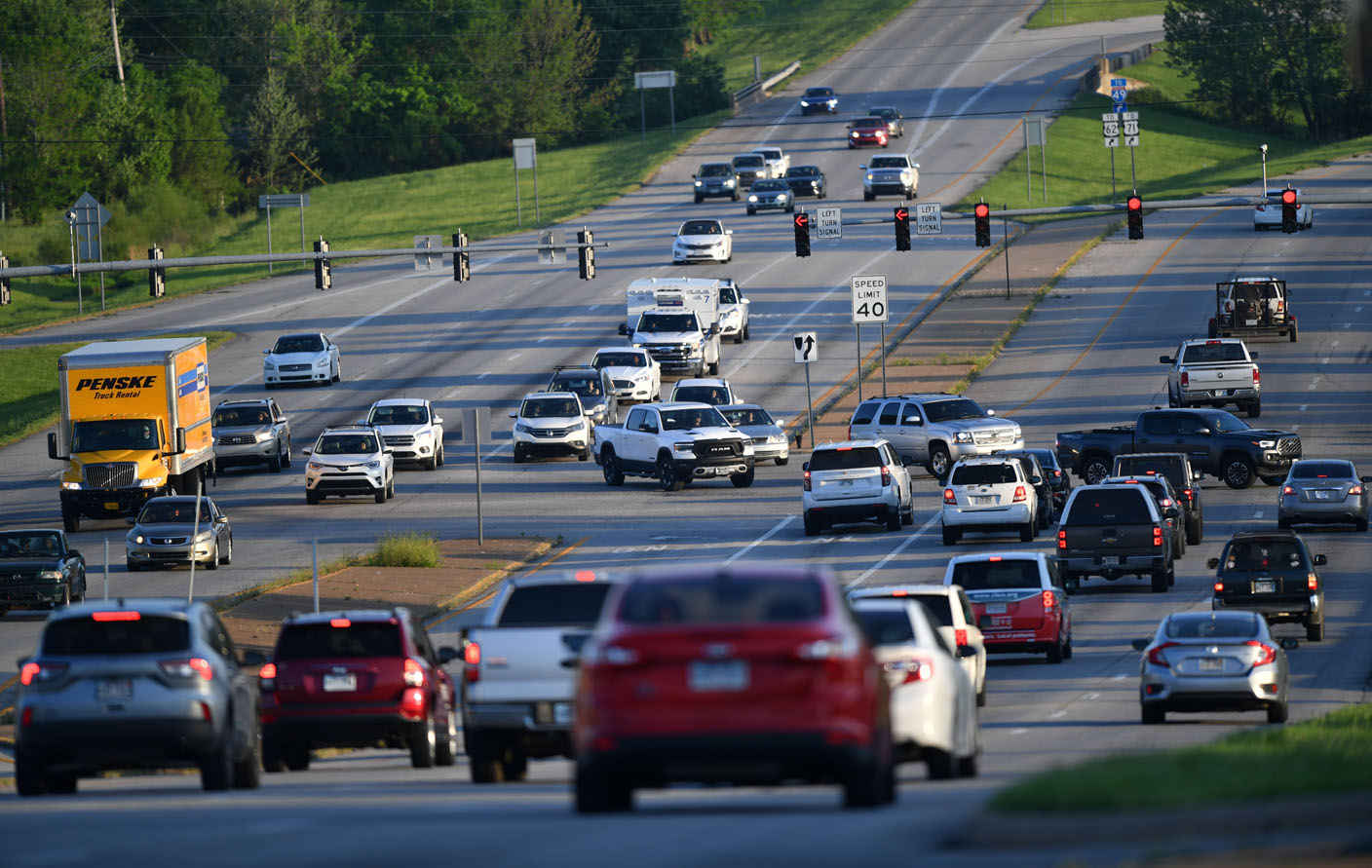 Traffic moves on Thursday, May 12, 2022, through the intersection of Joyce Street and College Street in Fayetteville. Regional planners got their first look last week in a draft of a new traffic congestion management process for the Northwest Arkansas metro area. The study provides a baseline assessment of traffic conditions and lays the foundation for developing strategies to reduce congestion on major roads in the area. Visit nwaonline.com/220515Daily/ for today’s photo gallery. (NWA Democrat-Gazette/Andy Shupe) 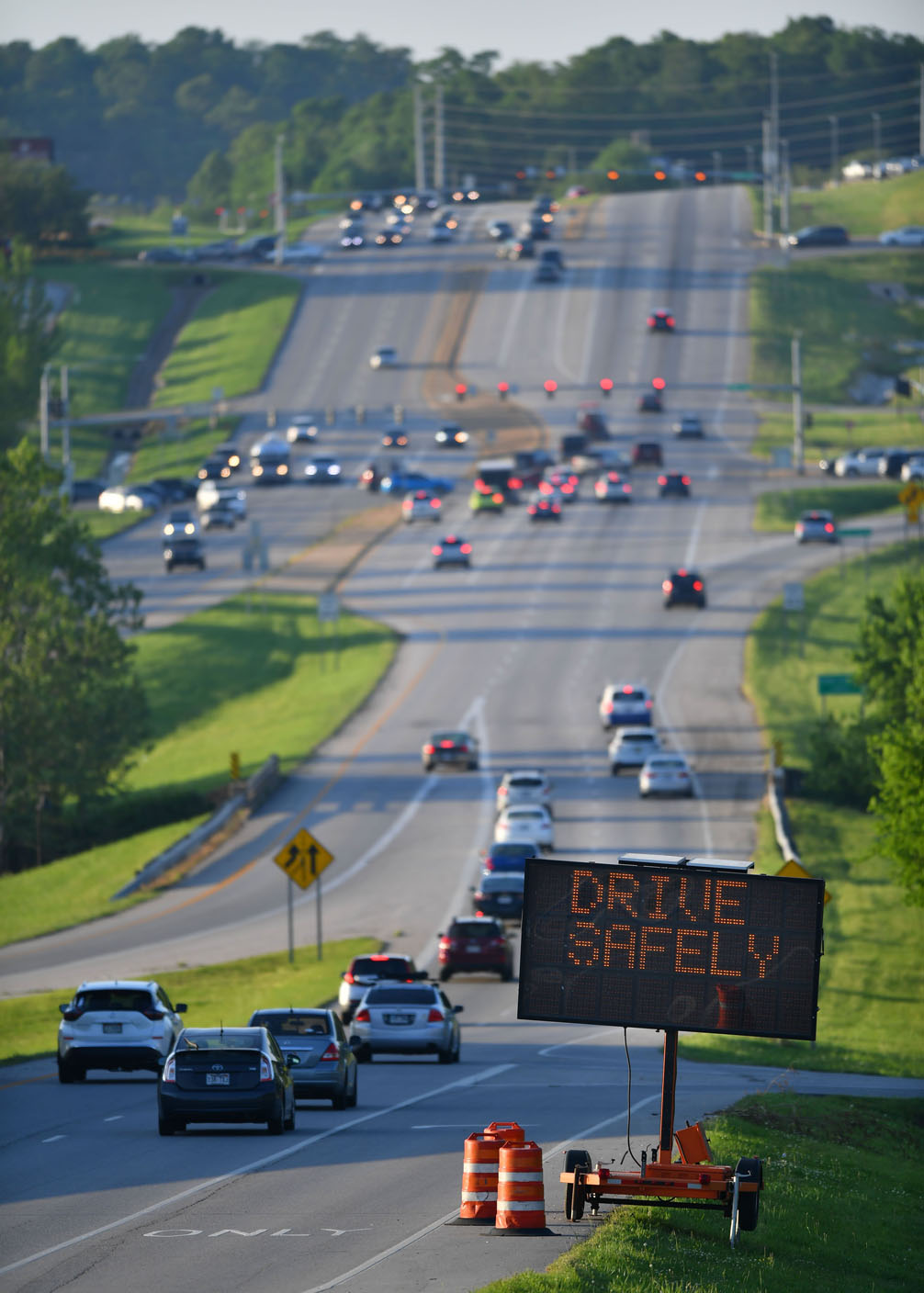 Traffic Thursday, May 12, 2022, along College Street in Fayetteville. Regional planners got their first look last week in a draft of a new traffic congestion management process for the Northwest Arkansas metro area. The study provides a baseline assessment of traffic conditions and lays the foundation for developing strategies to reduce congestion on major roads in the area. Visit nwaonline.com/220515Daily/ for today’s photo gallery. (NWA Democrat-Gazette/Andy Shupe)