Aside from some bright spots, this six-part series about the rise and fall of the original punk band is swamped by the cacophony of familiar rock.

There are few things that rock biographies love more than characters who act as if they know they are in a rock biopic. There is some unspoken need for conversations mired in The importance of music And the change the world And the make something realwith absolute certainty that this scattered group of newbies is on their way to changing the generation of fame.

The best you can say about “Pistol,” the new six-part limited series about the rise of the Sex Pistols against the backdrop of the burgeoning English punk scene, is that creator Craig Pierce and director Danny Boyle have a clear and deep love for the band they bring to life. But as much as watching characters gush over the shared love of David Bowie or predict the impact their art will have on a culture yet to come, much of Pistol’s work seems to be someone describing the dream they had the night before: undoubtedly means something to those who It does, but very little of that translates to their intended audience.

Problems begin almost immediately, with Boyle and Pierce splashing in archival footage from Queen Elizabeth II’s Silver Jubilee era, introducing the group through their most famous target. Even if this approach doesn’t seem like an unnecessary effect, “Pistol” works so hard to undermine the rise of the rocks and the fall of the story arc that it can’t help but stick to it along the way. Humble origins, luck breakthroughs, unexpected success, internal disagreements, regrets about an unfulfilled promise. It’s all here, even if he’s wearing leather, safety pins, and a bunch of hastily typed chaos codes for a good measure.

Much closer to “Bohemian Rhapsody” than “24 Hour Party People,” this show also has a fundamental issue with perspective, being filtered in nature through the band member’s less persuasive perspective. Here, that means looking through the eyes of Steve Jones (Toby Wallace), a conduit for the imperfect “Pistol” in all the wrong ways. The opening episode positions it as a major line of revolvers, over icons such as revolver manager Malcolm McLaren (Thomas Brody-Sangster), lead singer Johnny Rotten (Anson Boone), ultimate guitarist Sid Vicious (Louis Partridge), or hero designer Vivienne Westwood. (Talula Riley). Jones’ memoir “Lonely Boy: Tales from a Sex Pistol” forms the basis for this TV adaptation, which nonetheless turns his personal struggles with childhood trauma into a jumbled chaos of flashbacks that makes it more than a straightforward case study in over-the-rock.

It’s like failing to see a show about the Sex Pistols – a “fake until you make it” rock story – harken back to many of the story rhythms dedicated to bands with a more traditional origin story. Whether McLaren sees a legitimate spark in this awkward pairing of clumsy musicians and chronic singer, or whether it sees it as a coup to prove its goodwill as a major seller, Pistol needs you to believe in something. The first episode in particular plays the great self-fulfilling destiny without feeling any of the steps along the way either revealed or gained.

It doesn’t help to boot before the pistols actually begin to perform and record, the show is filled with a plethora of classic, spin-heavy rock needle drops, designed to remind you more of the late ’70s than really inviting. Those documentaries, which come to include contemporary news accounts of the rise of pistols and punks, work the same way. By the time the show delves into its three or four parade of painfully awful nickname origin stories, all it’s missing is a giant Adam McKay-style asterisk telling you “Yeah, that really happened.”

There is an unmistakable early energy in the effort of Boyle’s approach that clearly tries to evoke the spirit of a Sex Pistols song when there are no Sex Pistols songs yet. So instead of this band’s music and general ethos feeling like a jolt in the system, it’s another case where something like “Anarchy in the UK” comes predestined, with no sign of surprise or discovery. He frantically navigates between the outdoors and late-night booze sessions, often yelling “gun” without having much to say.

This changes somewhat with the arrival of Boon, who counts Johnny Rotten as one of the only items for “Pistol” that seems to come from the best version of this show. Much like Brodie-Sangster — who does his best despite being saddled with deeply bogus statements like “I don’t want to fuck you. I want you to fuck the world” — Boone adds some acquired human feelings behind the facade. If the Sex Pistols were an understated performer that stumbled their way into icons, you’d buy that it was possible because their attacker had a real, chaotic appeal. Where most of the show feels lethargic as it is dragged into gloom or absurdity, Boon finds a way to mine the fertile land in between. 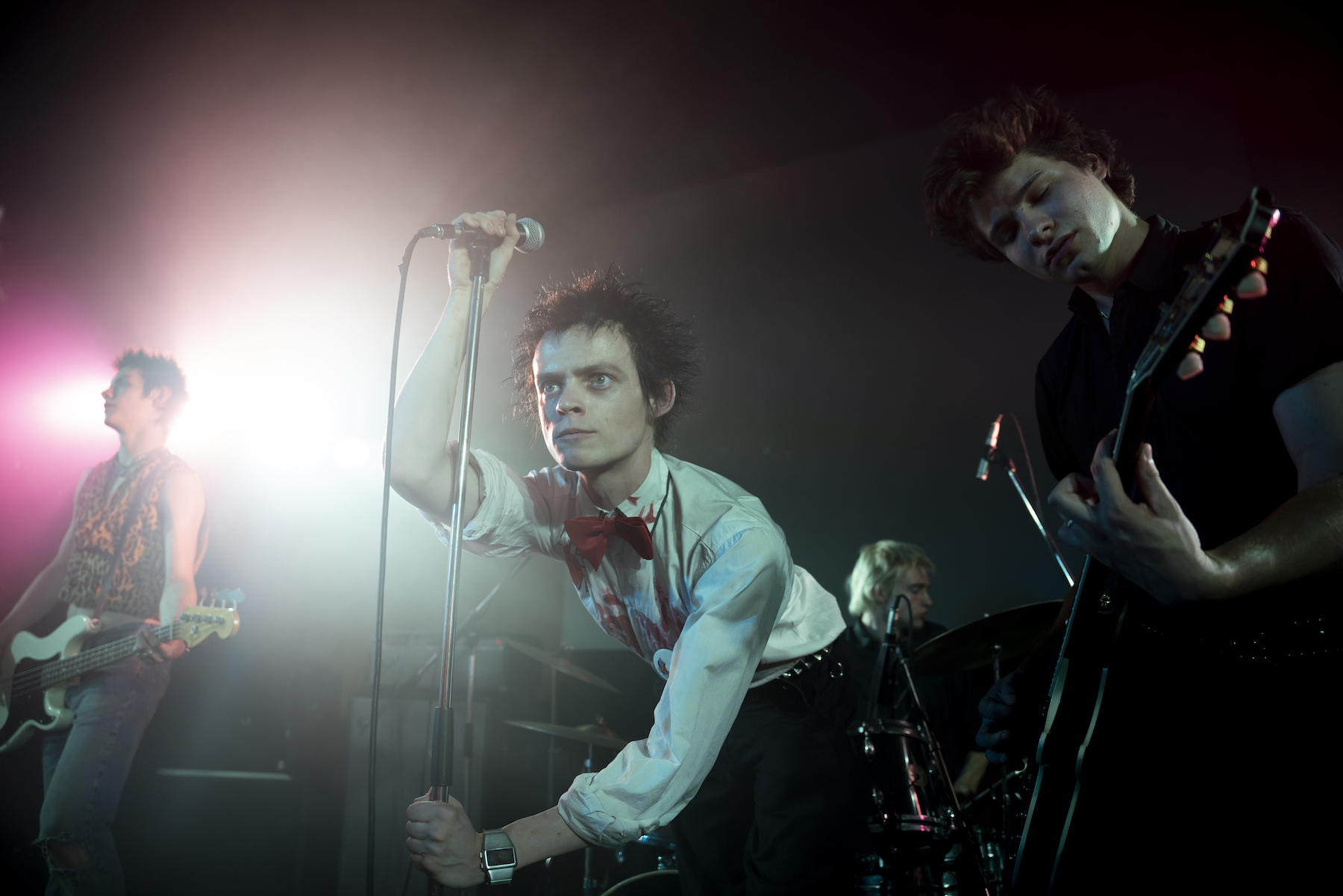 Pierce (a frequent collaborator with Baz Luhrmann who is also a co-writer on “The Elvis”) strives for a greater fit by occasionally turning away from the band themselves and tracking the influence of these men on their fans and associates. In stories of runaways or squalid employees who change themselves to embrace all that pistols stand for, the “pistol” points toward a greater understanding of what they mean to others. However, even then, these changes are the most aesthetic. The Revolver ends with a reference to the point that, to the extent that the Revolver was revolutionary, their version of rebelling against the status quo became more of a painting for people to express their anger rather than any larger guiding principle.

This results in a number of people being included in this story for reasons of proximity rather than necessity. There’s a fascinating story to tell about Chrissy Hynd (Sydney Chandler)’s early days in London and their intertwined fates with the advent of the Sex Pistols, years before The Pretenders even existed. Here, she gets short interests when she flings Jones again, then backs down again, another in the group of extra folks left out in favor of the same familiar fame, strife, and excess of the Rock Biopic checklist.

It’s rhythms that the “pistol” eventually uses to his advantage, but sparingly. The disastrous opening gives way to a more confident arc who trusts the Pistols’ performance more than attempts to artificially convey that spirit to everything else in this story. Whenever Boyle manages to curb provocative visual temptations and allow this group to function as a group, then the “Pistol” comes close to capturing the energy it strives for.

These six episodes show how stifling music and the road to shame were to these individuals, quickly consuming everything else in their lives. There are precious few times that a “pistol” does not fall into the same trap. On the rare chance that this show will find an unmoved moment among these guys—as it does in a quieter moment with them all on the beach late one night on tour—it finally feels like they are more than made up parts of something that will one day hold a steady corner of Screen printed t-shirt market. For most of the rest of the show, “Pistol” tries hard to make a case for a band that really didn’t need any help to make an impression.

All six episodes of “Pistol” will be available to stream on Tuesday, May 31.

Participation: Stay up-to-date with the latest movies and TV news! Subscribe to our email newsletters here.