On Sunday night, John Anderson didn’t flutter on stage like he usually does.

After a 30-minute performance from his current touring band—the Philadelphia-based Paul Green Rock Academy—the 77-year-old former front man of Yes camouflaged himself in a group of young musicians walking onstage from the right of the stage. No one noticed his stage presence for a few seconds, as he wore a jacket covered in green lightning. In Yesworld, you don’t get much younger than that. “Wonderful!” He said shortly after the mini-group approached King Crimson’s “Twenty-first Century Schezoid Man.”

The current offer of the Rock and Roll Hall of Fame recruiter is very different from any he has done in his long career. yes feat. ARW behind him, and 1000 Hands: Chapter One Era seems to be over. While we wait for the second act to appear – which tells him Creative Loafing Tampa Bay is “in progress” – Anderson decides to combine his love of touring with young musicians.

Last summer, he did a comeback tour from COVID with his friend Paul Green, founder of School Of Rock and his rock academy. The tour was already scheduled to stop in downtown Clearwater in July 2020, but you can probably see why it didn’t.

Anderson opened his ensemble with “Sun is Calling,” the first move of his 2011 long song “Open,” playing his guitar that sounded more harmonious than most of the other instruments around. But who the hell is going to rule anyone? As worthy as it sounds, his voice has aged like fine wine. It’s technically an old fart, but both physically and vocally, time seems to be more on his side.

The kids were totally interested in it, too. The impeccable harmonies of backup singers were present in “Yours Is No Disgrace,” and “I’ve Seen All the Good People” watched the kids swing from side to side, playing or singing all they had during the “Your Move” movement. Then, something happened that Yes fans never imagined: Jon and his friends broke into Lenny Kravitz’s “Fly Away”, where Jon was just singing “Yeah, yeah, yeah.” After the second or third verse, you’ll go flawlessly to “Long Distance Runaround” and “The Fish (Schindleria Praematurus)”, penned by John’s late Yes bestie, Chris Squire, who died of cancer in 2015. 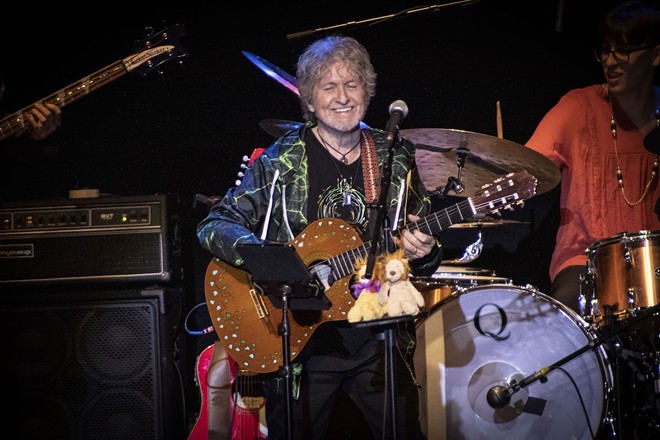 John explained, “Chris was very known for living in the bathroom, so we called him ‘Fish! Surely, if Chris had lived to watch this show, he would have appreciated the youth’s talent as much as his musical partner in crime.

On the “make me happy,” off 1000 Hands: Chapter One, a student tried to pull a piece of ukulele at first, but unfortunately for her, it was far from the melody. “Not in tune, guys!” She cried into the microphone, laughing. John started laughing at himself, the song went on, and that student had her moment of redemption at the end of the song, while playing her last chord, while in perfect harmony. This wasn’t the first time machines had failed performers. At one point, John announced that two of the kids playing guitar would be releasing Steve Howe’s “Mood For A Day” breakablebut before anything happened, one of the guitarists had to spend a few minutes reconnecting and turning up the volume on their sound.

What followed the little accident were two mini epics that still managed to give Anderson endless pride. “And You and You” and “Heart of Sunrise” received the standing ovation they deserve, and the Academy of Rock Music did an amazing job preserving the original sounds of each of the tracks. A 15-minute break came—plus Paul Greene’s “Support John on Patreon” message—and Jon and the kids will return to the stage to blast off the “Starship Trooper,” which usually shuts out the main group. Not that anyone had a problem with it, but it was a change of pace to say the least.

In truth, the entire second half of the show was a change of pace on its own. Led Zeppelin’s “Kashmir” song opened the wonderful surprise that was “Don’t Kill the Whale,” from Yes’s last classic era record, Tormato. The song “State of Independence” opened with a few bars from Eminem’s Lose Yourself, released by a young woman who did some screaming clips at the opening group of the Academy of Rock Music. And in celebration of becoming an American citizen 20 years ago, Simon and Garfunkel’s “America” ​​was performed, but not the “Yes” version. John Paul described Simon as one of the greatest songwriters to ever walk the planet (and he’s not wrong), so the way Paul and Artie sang him in 1968 was the way John felt saluting the two. We’ll sing a song from [Paul’s]But he never sings my songs! lamented. 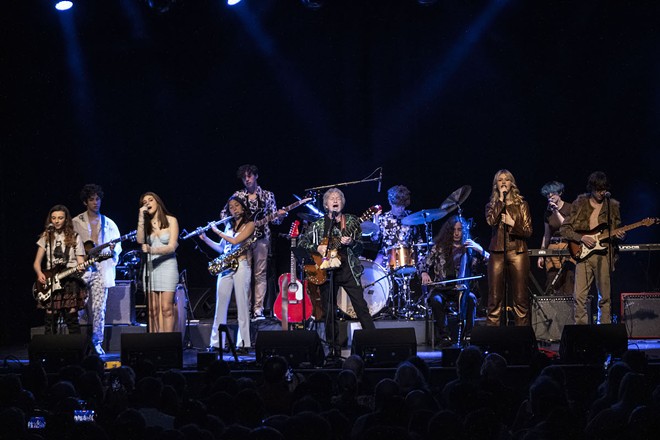 But perhaps the biggest surprise was the movie “Near the Edge”. Not the selections from the 3-track album. It was every 20 minutes of the epic that gave the 1972 three-track record its name. Kids installed every aspect of it, from the harmony to the hardware. She overshadowed the follow-up to “The Owner of a Lonely Heart” and the sequel to “Dizzy”.

Even if some children do not understand that they were on stage with a living legend, Paul Green himself understands it even more. He was actually doing the rounds backstage, front and center in the crowd, even getting up to introduce his students when the show first started. “These kids could be on TikTok on a Sunday night,” his theory said. “Instead, here they are playing the greatest music ever.”