The son and two grandchildren of a right-wing lawmaker were injured Tuesday night after their car hit stones on a highway in the northern West Bank, an alleged Palestinian attacker said.

The son of MK Orit Struck, of the far-right Religious Zionism party, lost control of his car after it hit stones near the town of Hawara, causing it to crash.

The emergency service of the Palestinian Red Crescent arrived at the scene first and treated the family.

The emergency service said the father, 24, was hit in the head and taken to hospital in moderate condition. His 2-year-old son and 4-year-old daughter were slightly injured.

“The Arabs tried to kill my son and young grandchildren in Hawara,” Struck, a member of the far-right Religious Zionism party, wrote on Twitter shortly after the incident.

Earlier in the evening, a 65-year-old man was slightly injured when his car was hit by stones while he was driving between the settlements of Ofra and Ma’aleh Livona in the West Bank. Magen David Adom paramedics transferred him to Hadassah Ein Kerem Hospital in Jerusalem for treatment.

“They were driving and it was very dark. Suddenly we heard a thumping bang on the windshield. We didn’t see where it came from or who threw it,” one of the passengers in the car told Ynet news site.

The head of the Benjamin Regional Council in the West Bank, a member of the opposition Likud party, blamed the government for the attacks, accusing it of maintaining a weak security policy.

“The political leadership decided to allow this to happen rather than cut this terror off with an iron fist,” Israel Gantz said. 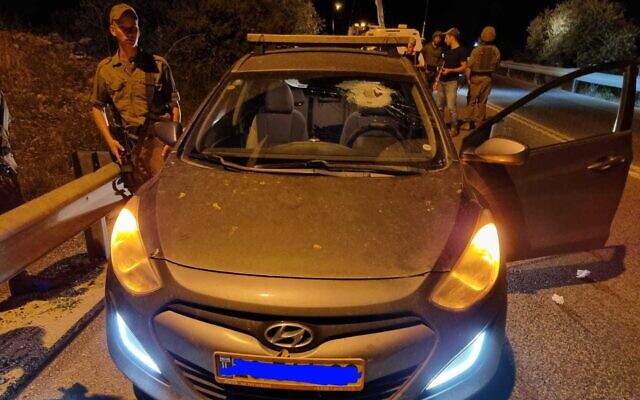 The damaged vehicle belongs to a 65-year-old man, injured in a rock-throwing attack near the settlements of Ofra and Ma’aleh Livona in the northern West Bank, May 24, 2022 (Benjamin Regional Council)

Also Wednesday evening, a 16-year-old Palestinian died of wounds sustained in clashes with Israeli forces near Joseph’s Tomb in the northern West Bank city of Nablus. The PA Health Ministry said Ghaith Yamin was shot in the head and died in hospital.

The official Palestinian news agency, Wafa, reported that the clashes erupted when Jewish worshipers, accompanied by the army, arrived at Joseph’s Tomb in the outskirts of Nablus to perform prayers.

At least 15 Palestinians were wounded by live bullets, according to Wafa, during the clashes near Joseph’s Tomb, a site of frequent flare-ups. Some Jews believe that biblical Joseph was buried at the site, while Palestinians say it is the tomb of an elder. 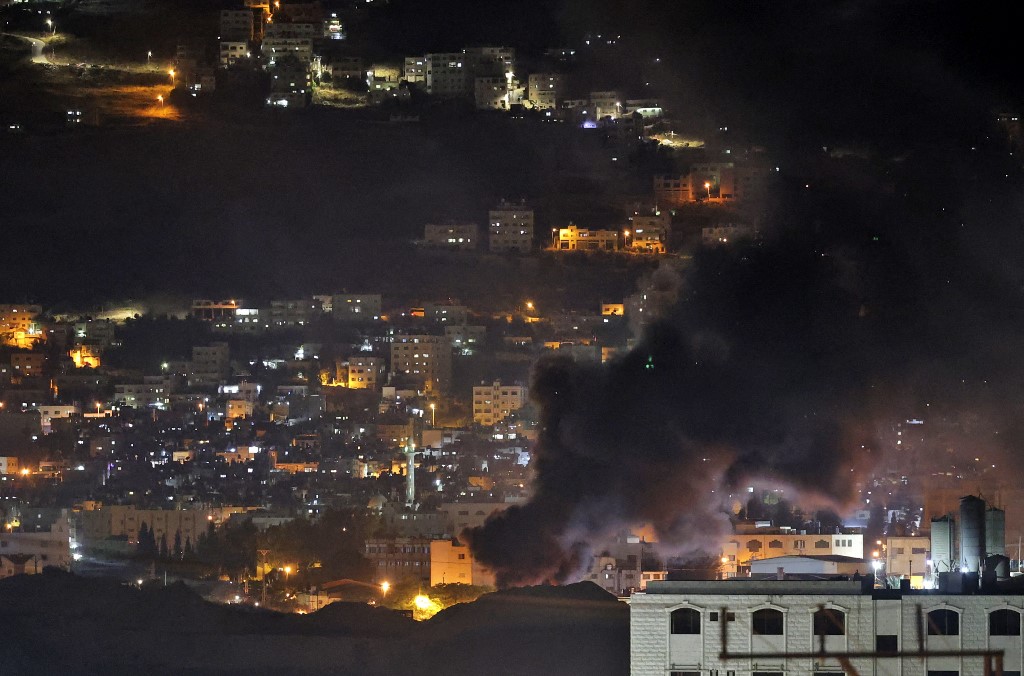 Smoke from burning tires billows at the eastern entrance to Nablus in the West Bank, with clashes between Palestinians and Israeli soldiers, on May 25, 2022 (JAAFAR ASHTIYEH / AFP)

The area has also seen recent clashes between Palestinian militants and IDF soldiers, who entered and operate in the nearby Balata refugee camp amid counter-terror operations following a number of deadly terrorist attacks.

Israeli security forces have stepped up their operations in the West Bank following a wave of deadly terrorist attacks inside Israel that have left 19 people dead since March 22. The raids were focused on the increasingly unstable Jenin district, where many of the attackers applauded, and the army said, on Wednesday morning, that six suspects were arrested overnight across the West Bank.

At least 30 Palestinians were killed during the same period, according to the Palestinian Authority’s Ministry of Health. Some of them were shot dead by Israeli soldiers while carrying out terrorist attacks, while others engaged in violent battles with soldiers, and still others – such as Al-Jazeera correspondent Shireen Abu Akleh – were civilians. Abu Oqla was killed amid clashes between Israeli forces and Palestinian gunmen in Jenin. The Israeli army says it has not yet been able to determine who fired the fatal shot.