like many countriesNorth Carolina is in the midst of a crisis in its mental health system. Health experts point out increasing number of mental health-related emergency department visits longer waiting times for psychiatric hospital beds and the increase in involuntary commitments as signs of much larger problems in the state’s mental health system.

Earlier this year, I had the opportunity to speak to a health law class at Wake Forest Law School about these issues. My recommended reading for students was a pair of fantastic articles by investigative journalist Taylor Knopf, co-published by NC Health News and WRAL-TV last summer. The topics covered provided a framework for discussion and I have summarized some of the highlights below.

The number of mental health-related emergency department visits in North Carolina is on the rise, straining a mental health system that already relied heavily on emergency rooms before the pandemic. For example, Atrium Health, a Charlotte-based hospital group, has seen a 65 percent increase in emergency room patients requiring psychiatric care. This is partly because people have nowhere else to go but the emergency room when community mental health services are inadequate or hard to find.

Children in need of psychiatric care are particularly affected. Demand for psychiatric care for children has tripled over the course of the pandemic, but a lack of available psychiatric hospital beds has resulted in children living in emergency rooms for extended periods of time. My friend Meredith works in the community behavioral health space and also talked to the class about examples she’s seen of kids living in an emergency room for six months while waiting for a bed in a mental health facility. 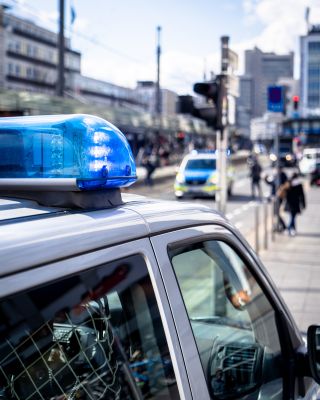 Use of law enforcement agencies for mental health patient transfers

The number of applications for involuntary commitment in NC has almost doubled in the last decade, and the trend accelerated during the pandemic. Commitment orders usually require a call to the local sheriff’s office to transport the patient to an emergency room or an available psychiatric bed.

Unfortunately, the presence of marked vehicles, uniforms and firearms often escalates the situation as officers may not have the proper training or tools to respond to mental health calls. Many patients and their families describe being traumatized by the process, which also usually involves the patient being taken away in handcuffs. A compliant patient can quickly become combative, especially among those on the autism spectrum.

As someone with bipolar I disorder, complex PTSD, and anxiety, I shared my own experience with patient transport when I volunteered a few years ago. AAlthough I was cooperative, non-violent and did not threaten to harm myself, I was told that I would have to be transported in the back of a police vehicle while handcuffed to a chain around my waist.

In the narrow, stifling steel-mesh cage, I sat at an angle so that I had room for my knees and feet. I shifted my wrists and hands to allow the handcuffs and chain to adjust before finding the least uncomfortable position to rest my arms. I then closed my eyes and tried to focus on my breathing as I rounded the edge of a panic attack in the next two hours.

In fact, many law enforcement officers are also reported to be unhappy about dealing with the relocation of mental health patients. Many argue that such transfers should be done either by mental health workers on their own or as part of an alternative mental health crisis response team. Many people with mental health problems also have other serious medical problems, and having law enforcement professionals without appropriate medical training responsible for detained patients who may be medically decompensated during transport can expose these professionals and their departments at significant risk of liability.

From here to where?

About 20 years ago, North Carolina lawmakers closed some state mental health facilities and redirected funding to more outpatient mental health services. With emergency departments flooded with patients, attention has turned to redirecting funding back to creating inpatient beds. At the end of the day, we have to realize that it can’t be one versus the other, it has to be both.

Stakeholders agree that North Carolinians need affordable access to readily available mental health services so they don’t have to go to the emergency room. This will require patient access to health insurance. The Affordable Care Act expanded Medicaid coverage and gave states an increased federal matching rate for their growing populations, but North Carolina is one of 11 states that did not adopt the expansion. Although bills to expand Medicaid were introduced in the North Carolina House and Senate, they did not advance before the adjournment of the 2022 legislative session.

Experts also agree that the goal of a well-balanced system should include a range of services, including easily accessible therapy appointments, intensive outpatient treatment centers, community wellness centers and psychiatric hospitals.